Buying and Selling IPv4 Addresses: A Market in Transition 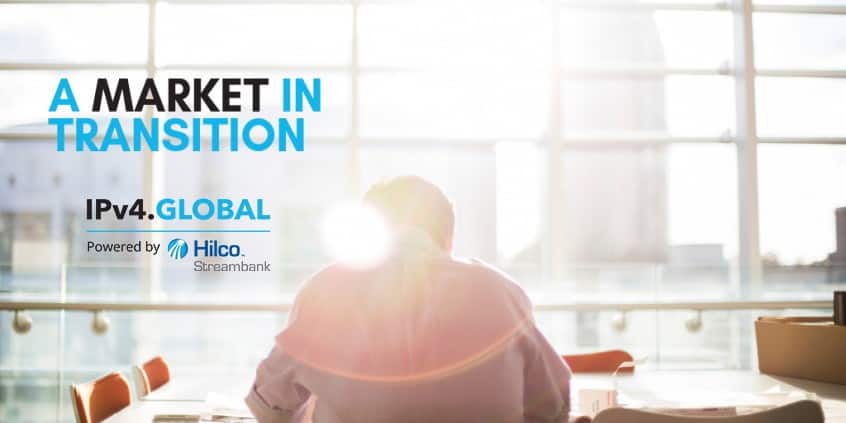 As we progress further into the digital age, new technologies are the driving forces behind IoT, big data, and enterprise cloud computing. The growth in these areas comes principally from massive economies of scale in storage, bandwidth, chipset manufacturing and other inputs. Each of these new technologies relies on internet connectivity, and until IPv6 adoption takes over as the dominant protocol, demand for IPv4 addresses will continue to grow. Connecting the remaining 1+ billion people on earth plus the myriad new devices trying to connect with older devices will require a dual-stack existence for many more years. The balance of the 4.3 billion IPv4 addresses that remain unused is shrinking, and enterprises around the world are scrambling to ensure they have enough to meet their growth plans.

For the past seven years, IPv4.Global has worked with more than one thousand IPv4 buyers who have purchased address ranges as small as a /24 block, containing 254 usable addresses, and those who have purchased an /8 block or more, containing more than 16.7 million usable addresses. The prices of these addresses have also drastically increased, and larger block sizes which traded for $5/IP in 2012 are now (2018) selling for $20/IP or more.

Understanding the components of demand will provide some insight into the market’s transformation over the last 7 years, since Microsoft acquired 10 Class B ranges from Nortel during Nortel’s bankruptcy (the first pure IP sale where price information was made public). Demand is often influenced by (i) expectation of future price changes, (ii) price and availability of substitutes, (iii) and growth of market to be served. For IPv4, it’s easy to see how each of these components will influence the market going forward. In this series, we will explore the complex world of IPv4 procurement, including the past, present, and future state of our industry and the role of IPv4.Global.

On April 15, 2011, the Asia-Pacific registry (APNIC) was the first regional internet registry to run out of freely allocated IPv4 addresses. This was soon followed by the Europe, Middle East and Central Asia registry (RIPE NCC) in 2012, the Latin America and Caribbean registry (LACNIC) in 2014, and the North America registry (ARIN) in 2015.  In APNIC and RIPE the communities held back “austerity pools” of remaining IP space to be allocated on a one-time basis to community members in ranges no larger than a /22. ARIN completely depleted its pool, other than a small remaining block reserved for critical infrastructure and IPv6 transition. AFRINIC reached its “last /8” rules in 2017.

At the start of IPv4 exhaustion in the early 2010s, buyers began to purchase additional addresses to support their future growth using a “buy-now transfer-later” agreement, or a simple option agreement for which the buyer paid a premium at closing and the seller was obligated to sell to the buyer on demand for a predetermined price prior to the expiration date. This was considered belt-and-suspenders insurance against a slow roll-out of the upcoming IPv6 protocol that promised more than 340 undecillion IP addresses (that’s 36 0s for those of us who haven’t learned to count past the trillions). If worldwide IPv6-adoption proved to be slower than originally forecasted (spoiler alert: it did) and the enterprise’s network was growing, having extra IPv4 available ahead of time made a lot of sense. Paying $5, $6, or $7 per address through 2014 seemed like cheap insurance – and it was. In these early transactions, motivation was principally the avoidance of paying much higher prices later, or ensuring availability at a lower cost when the resources were finally needed. Some of these transactions dating back to 2012 remain unrecorded at the RIR level, as the sellers are still the rightful registrants of the addresses. In this way, market transfer statistics from the RIRs under report the volume of activity in the market.

Once ARIN’s free pool was exhausted on September 24, 2015, awareness of the shortage became more acute and any organization with unmet need for IPv4 resources was forced to participate in the market. The capital expense of the addresses gave bundled providers, principally hosting, storage and ISPs, license to charge their customers for IPs that maybe have been previously included for free as part of a bundle of services. As an alternative to renting IPs from their service providers, bring-your-own-IP started to become a sound investment for enterprise end users, resulting in a growing demand for smaller blocks. As pricing for IPs climbed from $7 to $12 or more, buyer justification was principally based on a relatively rapid return on investment. If an end user was being charged $1/month for an address, a $12 purchase price yielded a one-year payback.  Even at lower monthly rates, three and four-year ROIs remained a sound investment as IPv6 adoption still seemed far away.

What Happened to IPv6?

IPv6 has been in the works since 1998 as experts attempted to address the impending exhaustion of IPv4 addresses, however, despite its clear advantages when it comes to efficiency and security, adoption has been incredibly slow. It’s now 2019, and we’re still not seeing widespread enterprise adoption of IPv6 protocol. So, what happened?

The fact of the matter is, it hasn’t necessarily been all that slow, it just hasn’t yet made its way into the mainstream enterprise space. Some carrier networks, ISPs and mobile networks have been successfully deploying this technology across their networks, some citing that more than 90 percent of their traffic uses IPv6. Many more have been working behind the scenes on IPv6 deployment plans and will roll them out and stop provisioning IPv4 to new customers in the coming years. These changes take significant time. Enterprises, by comparison, aren’t adapting as quickly because the business case isn’t as compelling. IT departments are often considered cost centers in large enterprises, and it is sometimes difficult to convey the benefit of moving to IPv6, even if it means selling the surplus IPv4 for $18/IP or more. As prices increase the case becomes more compelling, and slowly but surely, we will continue to inch away from IPv4 toward IPv6.

In part two of this series, we will explore predictions for the future of the IP address industry. For now, if you would like to learn more, visit www.ipv4.global.