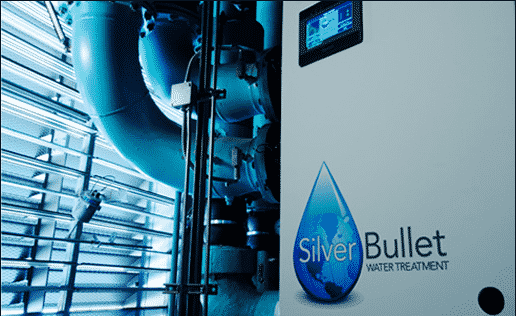 In the Washington, D.C. area, the legendary Willard InterContinental Hotel and top D.C. property developers Lerner Enterprises, Carr Properties and WC Smith, have partnered with Silver Bullet, a cutting-edge water treatment company, to introduce a commercially available system that dramatically increases building sustainability by cutting water, electricity and toxic chemical use in commercial buildings and data centers across the District.

Sustainability has gained a lot of momentum.  In D.C., Mayor Gray established the Sustainable D.C. initiative and the federal government enacted Executive Order 13514, an integrated strategy towards sustainability and a clean energy economy.  With these incentives and new ability to save on building operating costs, many commercial properties, particularly data centers, have jumped on the sustainability and clean energy bandwagon.   Silver Bullet’s innovative water treatment system helps these enterprises save on time, energy and money.

The Silver Bullet system provides a safe and highly efficient treatment that serves as a biocide that reduces and eliminates scaling and significantly reduces corrosion, while increasing energy efficiency and reducing water consumption.   Up to half of a building’s water use is from cooling towers, which provide cooled water for air-conditioning, manufacturing and electric power generation.  Significantly more water is used by data centers.  A typical 15 megawatt data center could use up to 360,000 gallons of water a day keeping all those servers and equipment cool enough to operate effectively.  By targeting this component of building and data center infrastructure for efficiency with Silver Bullet’s water treatment system, facility owners can immediately realize significant savings in electricity, water, labor and maintenance, while meeting corporate and government-directed sustainability goals, and saving money.

For Lerner Enterprises, one of the largest private real-estate developers in the Greater Washington, D.C. area, Silver Bullet estimated that water to fill more than 75 Olympic sized swimming pools was saved since installing the first system in 2011.  Silver Bullet systems are currently installed at 19 of Lerner’s properties, and that number continues to grow.  Lerner expects to save millions of gallons of water and tens of thousands of kilowatt hours of electricity, allowing for a decrease of overall operating costs and an increase in the sustainability of their properties without any investment of capital.

Silver Bullet estimates for the historic Willard InterContinental that nearly half a million gallons of water and 14,000 megawatt hours of electricity were saved since installation.  The company estimates that WC Smith has saved more than eight million gallons of water and 140,000 megawatt hours of electricity at its 298,000 square foot Federal Gateway office building since installing Silver Bullet in August of 2011. Silver Bullet is also helping the Department of Defense meet its sustainability goals. Its system at the North American Aerospace Defense Command (NORAD), located in the Peterson Air Force Base in Colorado Springs, Colorado, is saving over 1,000 megawatt hours of electricity and over one million gallons of water per year.

If Silver Bullet’s technology were installed on 20,000 cooling towers, just one percent of the commercial cooling towers in the United States, water savings could top 10 billion gallons a year and reduce electricity consumption by more than 1,200 megawatts of power.

Silver Bullet’s goal is to save customers water and energy, and reduce their operating costs while eliminating the use of toxic chemicals.  Silver Bullet was recognized with the 2012 Best Venture award from the U.S. Department of Energy’s National Renewable Energy Laboratory (NREL) for its cost- effective and environmentally responsible water treatment solution.