Phoenix Is About to Be Better Connected Than Ever Before 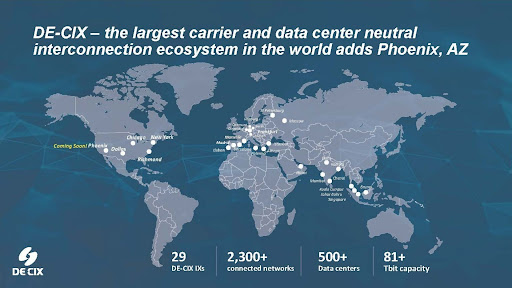 Phoenix, Arizona, the fifth largest city in the United States boasts a lot of great industries including technology. Within five hours by car from both Los Angeles and Las Vegas, Phoenix is becoming the new urban technology center of the West coast, which means it is now a core hub for data centers.

On August 30th DE-CIX, the world’s leading carrier and data center neutral Internet Exchange operator, announced its expansion into Phoenix, Arizona, marking its fifth IX in the United States. Phoenix is set to become DE-CIX’s western most location, which will fortify connectivity across the United States while it enhances gateway access between North America, South America, and Europe. DE-CIX’s expansion to Phoenix accelerates the company’s position as the largest carrier and data center neutral ecosystem in North America where it now serves four of the five top markets in the United States.

DE-CIX Phoenix will offer a high-quality interconnection fabric, multi-homed and accessible from multiple data centers throughout the market. The company’s commitment to industry-leading interconnection solutions via a vast array of network, data center, and sub-sea cable partners, positions DE-CIX to become Phoenix’s largest neutral and most advanced IX in the world. Stay tuned to hear when DE-CIX Phoenix is ready for service.