Level 3 jumps to top ranking above XO, Cogent and Zayo 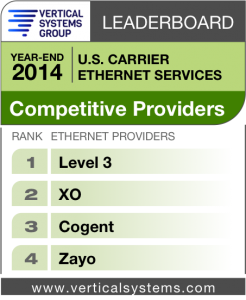 Each of these four companies has attained either a LEADERBOARD rank or a Challenge Tier citation on the 2014 U.S. Carrier Ethernet LEADERBOARD, the industry benchmark for measuring Ethernet market presence in the U.S.

“The large number of Competitive Providers selling Ethernet in the U.S. affords business customers an extensive choice of services, price points and delivery options,” said Rick Malone, principal at Vertical Systems Group. “While the Level 3 acquisition of tw telecom garnered a lot of industry attention, most companies in this segment substantially grew their Ethernet businesses to gain market share in 2014.”

To view this article in its entirety click here.