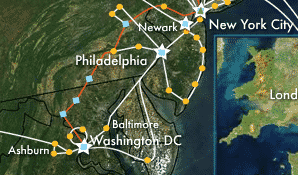 Sidera Networks, the premier provider of tailored, high capacity communications services, comprehensive facility-based network services, and superior industry expertise, is banking on intelligent investment in key markets. The company’s new President, Clint Heiden, formerly of PAETEC and Intellifiber, says their strategy lies in expanding and complementing their current assets to drive additional verticals, products, and density. Another vital component to their strategy is to diversify fiber paths between Northern Virginia and New York, and to have the ability to bypass key network congestion points in and around New York and DC. In addition, Heiden says Sidera will utilize its expertise in serving the most difficult vertical in the world, financial services, to help companies increase their global footprint and satisfy growing client demand.

Sidera plans to move quickly, efficiently, and deliberately in choosing where they invest, by focusing on expanding and complementing the assets they’ve already deployed.  The company’s network has over a billion dollars invested in it and it is serving the financial services industry – the single most challenging vertical in the world. By continuing to invest around the network they will drive additional verticals, products, and density. This will also increase EBITDA, profit, and margin while driving investor returns and creating paths for M&A.

Sidera aims to connect to every data center within two miles of their fiber over the next two years. According to Heiden, they were the first provider to light DuPont Fabros’ ACC-6, a key financial services building that tandems off their NJ-1 Piscataway data center.  In just one week, they progressed from initial discussions to full-deployment.  The customer was impressed and they clearly demonstrated their capabilities. Heiden says they expect a stream of announcements on similar deployments coming in the very near future.

One of the first things Heiden sought to highlight about Sidera is their Transcom route, running just west of I-95,  which provides a unique and diverse fiber footprint between New York and DC, terminating in Rockville.  By bringing that down to Ashburn they became the only provider with two truly diverse fiber paths between Northern Virginia and New York City.  As important, they also have the ability to bypass New York and DC, to provide a completely protected ring with low latency routes in these metros that bypasses key network congestion points.

Heiden also says Sidera is committed to growing their global footprint. Historically, AC-1 had dominated the low latency market in London.  Responding to customer-demand for an even faster connection, Sidera utilized a strategic relationship to cross the Atlantic and utilized their in-house expertise to build and utilize the right electronics at the landing stations. As a result they are now offering the lowest-latency route to Slough. They know how to get around the New York/New Jersey metro markets and out to Chicago – all critical to the financial services market.  Clients are also asking for similar connectivity to key financial markets in Pac-Asia and Brazil, and the company intends to do that too.