The Democratization of Interconnection: How to Understand it and Why it’s Needed 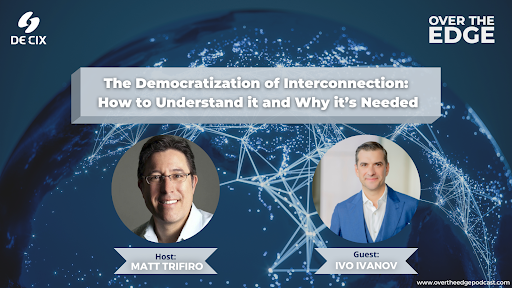 When looking towards internet connection, the future of improved performance, enhanced security, reduced complexity, greater flexibility will rely on interconnection. The benefits are endless and because most businesses now rely on platform-based models rather than traditional on-premise systems, they need to have the ability to assemble solutions using third-party components that share data across ecosystems. Ivo Ivano, CEO of DE-CIX International, had the opportunity to sit down with Matt Trifiro, Chief Marketing Officer of Vapor IO, on the Over the Edge podcast. Produced by Caspian Studios and Vapor IO, Over the Edge is a podcast designed to keep listeners up to date on all the latest developments in the Edge industry. Co-hosts Matt Trifilo and Ian Faison, CEO of Caspian Studios, interview corporate leaders, open-source experts, technologists, journalists, analysts, and innovators pushing the boundaries of edge. In the most recent episode, Matt and Ivo discussed interconnection, the importance of integrating edge computing, and what technology will look like five years down the road.

Where it all began

DE-CIX, the world’s leading neutral Internet Exchange (IX) operator, serves as a provider to ensure safe, reliable, and affordable benefits to revolutionize the future of connection as we know it. Ivo Ivanov began the podcast by touching upon his career in tech and what drew him to DE-CIX. As he describes it, he was drawn to “The magic of telecommunications and the magic around the internet itself.” Over time, he began to learn more about the industry, infrastructure, and much more which helped him pivot his role from an attorney to management. This provided him with an opportunity to begin his 15 year, ongoing career at DE-CIX.

Interconnection states from bringing the A side networks and the B side networks together. Ivo explains that there are two types of networks; Outbound networks who create content and inbound networks who deliver internet access to homes and offices. Interconnection is the connectivity between these two networks and how they meet. Internet Exchange services are a key tool for optimizing connectivity outside of the Internet. These services allow enterprises to interconnect directly with each other or with third parties in order to exchange traffic directly. This means that data doesn’t have to travel through multiple networks before reaching its destination, which reduces latency and increases performance. This is especially helpful when trying to connect from different access networks that are more or less interconnected. Ivo explains, “Today DE-CIX operates almost 40 different platforms on 4 different continents. In the US we have 5 different markets in New York, Chicago, Dallas, Phoenix, Richmond, and more to come. In Europe, the Middle East, Asia, India, etc. we have platforms. Why? Developed regions from the interconnection point of view needed to be upgraded infrastructure … Interconnection really needs to get deeper into the edge for one very simple reason, quality security performance in general, or a magic world of latency. Latency is extremely important nowadays. I love to say latency is our new currency.”