For Aqua Comms, the year 2017 was highlighted by new strategic alliances, major milestones, and significant accolades, and the new year has begun strong as we hit the ground running with more award wins, speaking engagements, and the continuing expansion of our subsea network. 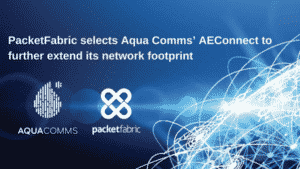 In addition to this, Seaborn’s Seabras-1 provides the fastest route between the New York-New Jersey metro area and São Paulo, while Aqua Comms’ AEConnect provides the newest and most direct route between New York and London via Dublin. The two submarine cable systems will interconnect in Secaucus, New Jersey, in the location of Seaborn’s primary network operations centre. A key advantage of this new subsea route is that both Seaborn and Aqua Comms offer geographically diverse backhaul and a variety of PoP locations in the metropolitan areas relating to their landing locations.

Capping a banner year, we also began to develop CeltixConnect-2, a diverse, high capacity subsea cable system crossing the Irish Sea from Dublin, landing near Blackpool, then backhauling to the northeast UK. With amplification in Aqua Comms’ Isle of Man spur, and using the latest low loss fiber technology, the company will achieve unparalleled capacity across the Irish Sea. For this deployment, Aqua Comms is adopting highly robust engineering practices for route selection, and maximising burial depths and armour protection to ensure it matches the uptime targets and the best-in-class reliability of its CeltixConnect-1 system.

To top off a brilliant year we won several awards, including the Global Telecoms Business (GTB) Award in the Innovative Infrastructure category. GTB recognised Aqua Comms and Megaport for their partnership whereby Megaport accesses its AEConnect system and enables elastic interconnection to its transatlantic subsea cable network. Enabling enterprise customers to access transatlantic capacity on AEConnect via Megaport’s global Software Defined Network, the innovative partnership is the first phase of a larger collaboration between Aqua Comms and Megaport that may include additional capacity and terrestrial landings. Because of all of this  Aqua Comms was presented with the 2017 Global Carrier Award for ‘Project of the Year – Subsea Networks,’ given by Capacity Media. We were also recognised for the innovation, vision and excellence demonstrated in its partnership with Epsilon to bring European route diversity and on-demand connectivity to the colocation campus of NJFX.

2018 began with a bang! In January, Aqua Comms sent six team members to PTC’18 in Honolulu Hawaii where the company proudly hosted two networking events. During the conference, Mr. Bayliff also spoke on the panel, “New Routes, Destinations and New Technologies,” where he explored the next phase of undersea and terrestrial networks. At the end of this successful conference, Aqua Comms received the PTC Innovation Award for ‘Best Networking Innovation’ alongside its partner, PacketFabric.

During the event, on January 15, Aqua Comms made a milestone announcement that it joined the HAVFRUE consortium with Bulk Infrastructure, Facebook and Google to own and operate a new subsea cable system connecting New Jersey, U.S. to Ireland and Denmark with connectivity options to Norway. This new endeavour will help meet the demand for hyperscale capacity and connectivity between the U.S. and Northern Europe as Scandinavia’s digital economy continues to expand. 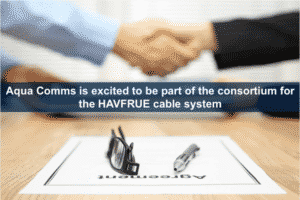 This year has already began bringing exciting opportunities for Aqua Comms. We have had the opportunity to attend multiple industry events, including Pacific Telecommunications Conference in Hawaii, Metro Connect in Miami, GCCM in London, NANOG in Atlanta, Submarine Networks in London and sponsoring Deeside Forum in Wales to meet with potential partners and various media to discuss its mission and exciting new developments. In addition to this we look forward to attending many more shows as well as hosting some events at conferences namely ITW in Chicago and Capacity Europe in London.

Aqua Comms has continued to speak to various publications, including Data Center POST, Irish Tech News, Capacity Media and Lightwave to share information about the company’s most recent initiatives and the current state of the subsea cable market. The team is looking forward to attending Capacity Middle East in Dubai this March.

Given the ever-increasing demand for connectivity to Scandinavia, 2018 will see Aqua Comms develop North Sea Connect, the first modern, high capacity subsea cable system crossing the North Sea from Newcastle to Denmark. North Sea Connect will be a repeatered cable system that interlinks with the CeltixConnect cables via UK terrestrial routes. This new cable will enable direct, un-regenerated, high capacity connectivity between Dublin and Denmark, and serve the demand for data centre interconnectivity.

Additionally, this year, Aqua Comms has plans to expand available connectivity to AEConnect at its PoP at 1025Connect in Westbury, New York, a critical subsea cable launch point on Long Island, which will facilitate its network strategy to bypass Manhattan for greater diversity. The company will also increase the system’s footprint by opening service capabilities in Ashburn, Virginia, and at NJFX to better serve expanding and new customer requirements.

Aqua Comms envisions the NJFX and 1025Connect partnerships as the future of its network expansion into the U.S., enabling its growth strategy for years to come.